The Department of Computer Science is excited to feature our summer research groups and take a look at what they are working on!

The application leverages concepts from human computation, collective intelligence, and open collaboration to enable current and potential adopters to find interdisciplinary courses and project ideas of interest, and to become motivated to participate in the dissemination and sustainability of hosted projects. They are also continuing development on some of the applications developed by students in Dr. Pulimood’s Software Engineering classes in previous semesters.

The CAB Project was supported by two grants: 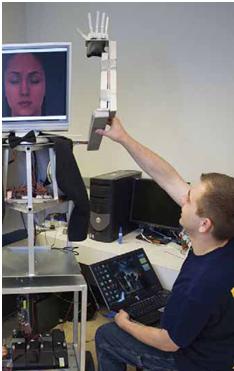 The resultant course is allowing students from each professor’s discipline to construct artificial systems capable of conducting an orchestra and visualizing feedback. In essence, the students will create a robotic “maestro” that mimics the arm movements and facial expressions of a human conductor at work.

Salgian contrasted her ideal conductor with Honda’s “Asimo” robot, programmed to conduct an orchestra in 2008. That robot merely conducted the beat—and lost it. “We want [TCNJ’s] system to have more information about the music,” she said. “Ideally it would also get some feedback and it would be able to use what it hears.”

“Asimo was very cute,” Salgian admitted, “but we want to introduce a different aspect to it.” She speculated on some design possibilities—a “face” represented by computer visualization, for example—but said that the product will ultimately depend on the students. Each of the four or five mixed-major student teams will turn out their own design.

Salgian stressed the focus on collaboration: “The entire system is not necessarily the goal of our research project, it’s more of a vehicle to use to teach students to work together. Our hope is that they will all become more creative by having to integrate knowledge from different fields,” she said.

Philip Tate, director of the TCNJ orchestra, will act as a consultant on the project. The first course will be offered this fall.