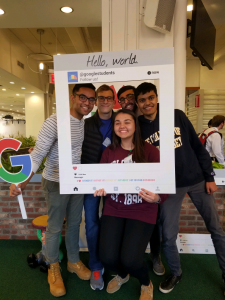 The Google Games are held yearly and are open to first, second, and third year students attending these colleges and universities.  Competing students work together to solve logic puzzle and coding challenges according to each year’s theme.

Congratulations to the team on their achievement!

CS Major Spencer Viviano (Class of 2019) and his teammate, marketing major Neophytos Zambas, were awarded second place in the Mayo Business Plan Competition last week. The two students built an app called NeoBook that could serve as a platform for college students to buy and sell textbooks and other items with students at TCNJ and at other institutions.

NeoBook was announced as one of the three finalists projects, and the final awards ceremony was held on Wednesday, April 5 in Education Building 212.  As a prize, Viviano and Zambas received an award of $14,000 for their work on the prototype.

Congratulations to Spencer and Neophytos!

More information about the finalists’ projects can be found here: http://business.tcnj.edu/2017/03/28/mayo-business-plan-finalists-announced/

For more information on the Mayo Business Plan Competition: http://business.tcnj.edu/events/mayo-business-plan-competition/

RedHat, the North Carolina-based open source coding company, recently recognized Dr. Monisha Pulimood and twenty other Computer Science faculty who are at the forefront of teaching open source at their institutions.  Dr. Pulimood utilizes open source in CSC 415: Software Engineering, which she teaches every semester.  Please see RedHat’s news posting about the event for more information.

Dr. Pulimood also served on a panel on implementing GitHub in the classroom at the SIGCSE conference in early March.  See the video below for a record of the panel.  Dr. Pulimood’s talk begins at time marker (11:45).

On Wednesday, March 29, the Computer Science Department was visited by 19 high school freshmen from the Hunterdon County Computer Science and Software Engineering Academy.   The students, escorted by two high school personnel – including their vice principal, the academy’s CS teacher – visited the department to learn more about CS @ TCNJ.

Current CS majors gave the visiting students a tour of the department’s facilities, demonstrated their research and class projects, and shared information about the CS program at TCNJ, as well as their internship and mentored research experiences within the department.  A representative from the Office of Admissions also spoke with the visiting students about the process of applying to TCNJ.