Siobhan Sabino is a jack of all trades — writer, photographer, Harry Potter aficionada, web designer, French linguist, and history buff. But it was love at first Google the day her family home hooked into the Internet, thus commencing her love affair with computers. 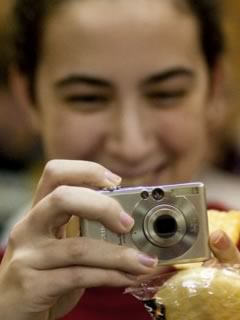 These days the sophomore computer science major balances a twenty-credit course load with graduate-level research developing a content management system called Collaboration and Facilitation Environment (CAFÉ). Designed to provide a “collaborative environment” for web publishing, the project is funded by two grant programs of the National Science Foundation (Collaborative Research Experience for Undergraduates- CREU, and Broadening Participation in Computing- BPC), and the project consists of three female undergraduates working under the direction of Drs. Monisha Pulimood, Kim Pearson and Ursula Wolz. Throughout the 2009-2010 academic year, Sabino has spearheaded the stabilization and security aspect of the program.

“My job is to get a stable, cleaned-up version that can be packaged and implemented by teachers in the classroom,” said Sabino. “This means combing through the code for mistakes and redundancies, so in the end it will not only work, but will be stable, safe, and difficult to crack.” At the moment, the technology of CAFÉ is designed to manage the content and workflow of the Interactive Journalism Institute for Middle Schoolers (IJIMS) at Fisher Middle School here in Ewing. However, the ultimate goal is for the program to be distributed throughout the country as a new tool of online journalism and creative writing in a digital setting.

Sabino describes CAFÉ as a shared user account database, to which students upload articles and then the teacher edits by means of a color-coded proofreading tool. After completing the suggested revisions, the student resubmits the article and it appears on the front page of the website. “As a writer working on a system for writers, I’m able to put myself in their place to anticipate uploading issues or decide what type of feedback would be most helpful,” noted Sabino. One of the most rewarding aspects of the project, she added, is seeing students, those who might never have had the chance to learn how to write well, create really engaging multimedia story packages.

“In high school, I was fortunate enough to have been given the tools to see how writing is not just about the words on the page but how they look, how to use them to create an image, and how to draw a picture around it,” she said. “I love the creative part of coding, of looking at things in a different way and thinking outside the box.”

Unsurprisingly, this mindset has been indispensable throughout the course of the project. At one point a dilemma arose of how to identify minors on the public website given that parents wanted to view their child’s articles. The creative solution was Sabino’s suggestion: parents would be provided general usernames and passwords to access the site.

When asked the most exciting part of research, Sabino described the sweet satisfaction of solving a problem. “Sometimes you’ll be working on the program, holed up in the lab for hours. The sun may have gone down and though its dark, you just don’t want to stand up and flick on the lights. But then, when you run the program, it miraculously works and you scream ‘YES!’ That pure exhilaration of success is unparalleled.”

Though she is taking things one step at a time, Sabino says an internship or, even better, a career with Google would be a dream come true. “Anything Google I cannot live without,” she exclaimed. “I would be lost without my Google calendar, I absolutely love Gmail, and Google Wave is the most amazing tool I’ve ever seen.” It is in precisely the sort of creative job environment Google boasts that Sabino hopes to work someday, crafting technology that helps people, “a new pay it forward,” she added.

In the meantime, the French and History minor plans to continue working with Dr. Pulimood over the summer as well as into next year, and Sabino is looking forward to attending the fall Grace Hopper Celebration of Women in Computing Conference, funded by the CREU grant.

“The emphasis on involving only women and minorities in the CREU program is purposeful, it recognizes that other grants might be unknowingly prejudiced and compensates by giving us the opportunity,” she noted. “With CAFÉ, we are doing something similar: giving minority students the chance to be involved in computer science. It’s absolutely rewarding.”