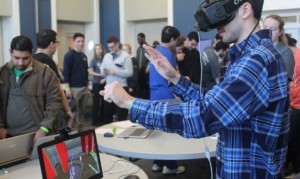 The Association for Computing Machinery (ACM) is a student organization for those interested in computer science. Through different activities, ACM helps its members explore further what they have learned from their classes.  Senior and ACM President Brandon Gottlob says, “As a computer science major, there are many different skills to learn and ways to apply and expand upon the concepts from courses. This can take the form of research projects, personal projects, working with different programming languages, and devices to develop on.”

First-year computer science major Henry Shen says, “I wanted to join ACM because I wanted to immerse myself in the field that I probably will spend a lot of my adult life and career in. Any opportunity to gain more knowledge and experience is great.” Jabari Brown, another first-year computer science major, agrees. “I joined ACM to put myself around like-minded individuals. Since then, I have learned so much that can help me in the field.”

Gottlob adds, “The only way to gain awareness of so many topics is to learn about them from others. I saw taking a leadership position in ACM as a great way of creating a more collaborative community among TCNJ students interested in computing and creating a medium where people can be exposed to the wide range of things they can accomplish with computers and programming.”

During weekly meetings, ACM plans varied activities that are both engaging and fun.  Gottlob says, “Most of our meetings are discussions about specific topics in computing or tutorials on programming languages, platforms, and tools.”  Shen adds, “We do tutorials on important computer science topics such as how to use Github (a web-based software hosting service), what the compiler differences are between programming languages, and more.”  In addition, ACM also holds fun events throughout the year such as ice cream socials and game nights to encourage members to interact with each other outside of their primary area of interest. 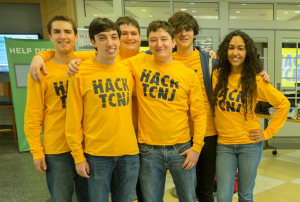 The annual Hackathon is an important part of ACM, which this year was held on February 26-28, 2016.  Gottlob explains, “The largest event we hold once per year is HackTCNJ, a 24-hour event known as a hackathon where students from schools all over the northeast come to develop their own software applications. At the end of the 24-hour period, students’ projects are judged and prizes are awarded. Because we are funded by sponsor companies, the event is completely free for all participants and food is provided throughout. We estimated that we hosted about 200 college and high school students with a very large majority from colleges in the tri-state area, like Rutgers, Temple, Drexel, Monmouth, Rowan, West Chester, and TCNJ of course. We had over 30 project submissions as well. It was by far our biggest HackTCNJ to date.”

There are many benefits from joining ACM.  For first-year and transfer students, it is a great way to get involved within the department and learn more about computer science.  Gottlob says, “Joining ACM will help new students gain exposure to a wide range of skills and perspectives that they won’t find in the classroom. This exposure could help them gain interests in specific topics and languages that distinguish them from the rest of their peers and that they could pursue in research and personal projects throughout their time at TCNJ.”

ACM also allows students to get to know the upper-level students on a more personal level.  “Many people transfer out of computer science because it can be very intimidating to beginners, and getting to know the ACM members can show new students that their struggles are actually common since many upper-level students have similar experiences,” adds Gottlob.  Brown agrees. “Freshmen and other students should get involved with ACM because it is a very good way to connect with students and faculty in the department. You share ideas and learn interesting topics related to computer science that will help develop your future.  It is a great way to explore your interests within computer science.”  Shen also hails the benefits of joining ACM.  “If you want to be in an environment that is supportive for new programmers and people with little computer science experience before becoming a CS major, this is a great place to learn and ask questions. In order to gain experience in computer science, taking the plunge is the first step.” 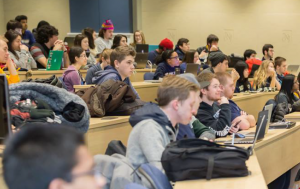 As a whole, ACM reflects the important values within TCNJ’s computer science department.  As Brown says, “Everyone within the department is really friendly.”  Shen adds, “Everyone is super nice and really fun to be around.”  Gottlob concurs. “All of the CS professors are very approachable and encourage all students to participate. I try to cultivate the same attitude in ACM by establishing an open environment where the ideas and participation of any member is highly valued, no matter his/her level of experience.”